Nursing homes – and other institutions – KILL 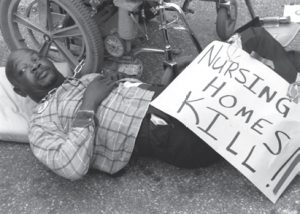 Nursing Homes – and other Institutions – KILL

America is learning what Disabled people have known for years: institutionalization kills.  On January 28th, COVID-19 deaths associated with nursing facilities in the United States exceeded 150,000 according to the national tracking site managed by The Atlantic. While institutionalized individuals make up less than 1% of the population, people in institutions account for 36% of all COVID-19 deaths. With a total of 1.5 million nursing facility residents nationally, one-in-ten nursing facility residents have now died from COVID-19.  This isn’t “disproportionate;” it’s a massacre.

Many of these deaths were preventable.

Although many people assume that these deaths were unavoidable because people in institutions are “sick” and “frail,” research tells a different story.

Based on this research, had we transitioned people to community living options, over 136,000 of the institutionalized individuals who have died from COVID-19 would still be alive today.

People are recognizing the problem with institutions and are calling for change.

More and more news coverage is citing the failure of these institutions but assumes that the way to resolve this is through increased funding and oversight.  Most people – including the media – don’t realize that people with significant disabilities can be effectively served in the community.  They also don’t realize that people have been dying before their time in our institutions for years.  Before COVID-19 we were heartbroken when 11 children in a New Jersey nursing facility died from an outbreak of an adenovirus.  Their deaths foreshadowed the current crisis.  They also remind us that when the pandemic dies down, our siblings in the institutions will continue to die.

That’s why it’s time for Congress to pass the Disability Integration Act (DIA).

The Disability Integration Act would give individuals with significant disabilities a truly enforceable right to live in freedom.  No longer would states and managed care companies be free to lock us away because we are considered “too disabled”.  We ended the last Congress with a majority of the House of Representatives cosponsoring the bill (239), and – with 39 Senators on the bill – we only needed 12 more votes to be able to pass the bill in both houses.

The time is now!  A new Congress has begun.  Democrats overwhelmingly supported the bill during the last Congress.  Now they control the Congress and we have a Democratic President who has expressed his support for our cause!  After decades of hard work, civil rights legislation to ensure Disabled people are no longer locked away in institutions is finally in our reach.

Despite the widespread deaths, there is still opposition to our work!

Democrats are being lobbied vigorously by managed care companies and other special interests such as the institutional unions urging them to do a “scaled back” bill.  At the same time, providers are trying to transform our fight for freedom into a funding free-for-all.

We have already seen that incentives don’t solve the problem, and that states will continue to institutionalize us – even when they know we will die.  A scaled back bill will most certainly leave disabled people behind to die in the institutions and won’t hold the managed care companies accountable for their role in stealing our freedom and our lives.

Congress must recognize that providers and lobbyists put their own interests in front of the disabled people who are now dying in our institutions and that managed care companies have peppered the Disability Community with money in an attempt to buy loyalty – or at least silence.

We can’t bring back, the 150,000 institutionalized Disabled people who have died from COVID-19, but this Congress – and our new President – can give their deaths meaning.  We call on the Democrats to pass the Disability Integration Act so that President Biden can sign the legislation and finally FREE OUR PEOPLE!

ADAPT was founded by the Reverend Wade Blank who, in 1975, assisted several nursing facility residents with significant disabilities to move into the community. Three years later, the group organized the nation’s first demonstration for wheelchair-accessible public buses. The Gang of Nineteen evolved into ADAPT which successfully secured the right to accessible public buses, saved Medicaid and Obamacare, and is fighting to bring the promise of freedom to all Disabled individuals who would otherwise be institutionalized through its efforts to pass the Disability Integration Act.